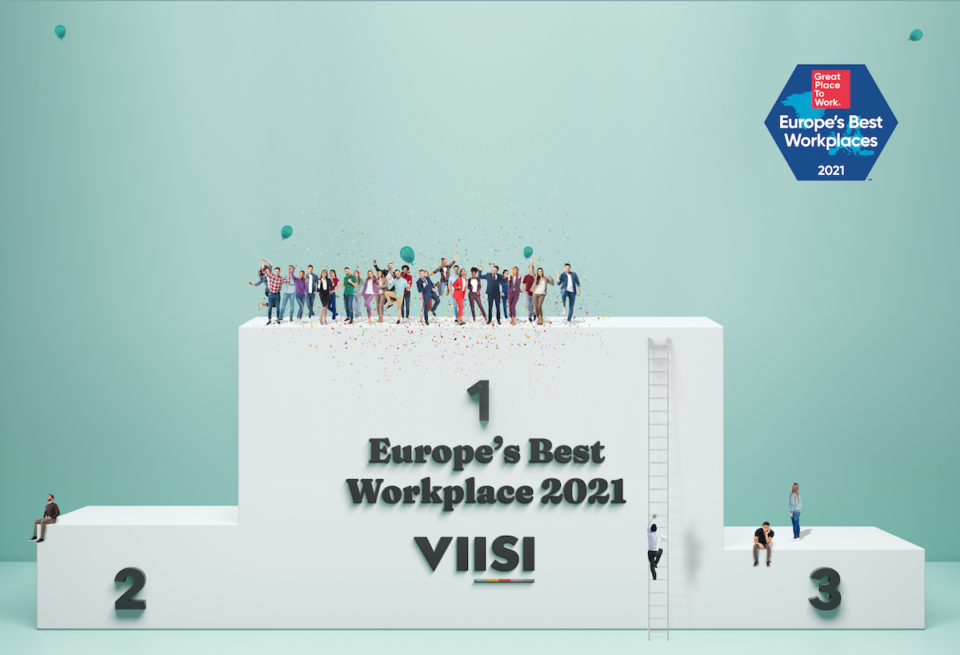 On September 21st 2021, Viisi Hypotheken was chosen as Europe’s best employer in the small workplaces category (up to 50 employees) for the first time ever. The title of Best Workplace in Europe is awarded annually by Great Place to Work, an analytics and consultancy firm, based on a comprehensive analysis of employee satisfaction and employment policies. This year saw 3,000 participating organizations from 36 different countries, representing over one million employees in total.

Earlier this year, Viisi Hypotheken was voted best employer in the Netherlands for the third time in a row. After being placed thirteenth and fourth in the 2019 and 2020 editions, the Dutch chain of mortgage advisors may now also officially call itself the best employer in Europe. “We’re extremely proud that we’ve won this award in the very year of the corona crisis,” says Tom van der Lubbe, co-founder of Viisi Hypotheken. “Not only in good times, but even more so in difficult times, is it vital to put your own people before anything else. They, after all, make the difference in a company. In this sense, the corona crisis has been a litmus test. It comes as no surprise that the winners have been organizations that have stood by their staff.”

Good employment practices
A focus on good employment practices has allowed Viisi Hypotheken to grow rapidly in the past year. Van der Lubbe adds: “The past eighteen months have shown that good workplace policies amount to more than just a ping-pong table or coffee bar with sustainable coffee beans and oat milk cappuccinos. More and more often, the corona crisis has made employees see right through what has been dubbed ‘social washing’. In the United States, the consequences are already visible and we’re even starting to hear terms like the ‘Great Resignation’ or ‘Big Quit’. Because the crisis has affected everybody, I see it mostly as a perfect opportunity to start a real discussion about what would be considered good employment practice and how we can go back to focusing on substance rather than form. Let’s hope that after the Big Quit, no employer will again dare to utter the words ‘Human Resources’.”

About Viisi Hypotheken
Viisi Hypotheken specializes in independent mortgage advice and supports mostly first-time buyers as well as young professionals in the housing market. All advisors are university educated. Viisi Hypotheken is a business with a clear mission: let’s change finance. The company has a so-called #peoplefirst strategy, meaning that its own staff come first, followed by customers, who in turn come before shareholders.